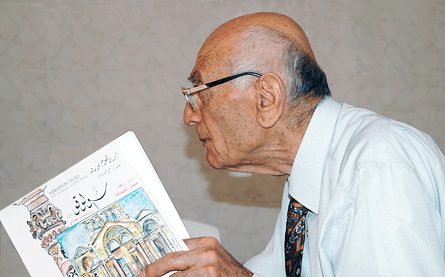 ↬ In 1946 he joined the University of St. Joseph, Lebanon, and studied law, only to withdraw in the final year due to illness. From the 1950s he began to work in the field of Syriac, especially teaching the language, and was the first to introduce Kthobonoyo Syriac as the spoken language at home (first with his sisters, and much later in life with his wife).

↬ Nuro was a symbol of activism for a language and a heritage he so proudly cherished. Western scholars got to know him as he was a regular attendee of the Symposium Syriacum. In the East he worked most of his life for the advancement of the Syriac language.

↬ The numerous neologisms he devised are now standard in Kthobonoyo. He knew the lexica almost by heart.

↬ His reform proposals include printing Syriac in separate letters (al-Istrangiliyya al-Mustaqilla with Karim Shahan, Beirut, 1967), and hundreds of neologisms for modern technical terms, many of which are now standard in Kthobonoyo Syriac (see Tawldotho, 1997, and the appendix to Manna.’s dictionary, 2nd ed.,Beirut, 1975).

↬ His private library is rich with books published in the Middle East during the 1800s and 1900s, most of which were acquired in photocopy form by G. Kiraz. His unpublished works include a checklist of the Syriac books in his collection, and various studies in draft form.

This work is dedicated to the soul of Malfono Abrohom Nuro.